If you’re a Wii U owner, I’m sure (had you had the time) you’ve played the Splatoon Global Testfire. One of the top criticisms you generally hear about Nintendo is that they recycle their IP’s – whilst this is not necessarily true – Nintendo challenges this with a new iconic hit. Nintendo had three one-hour sessions where the servers were online to test how well the game operated with a large quantity of players, and it’s impressively been one of the smoothest online Nintendo games yet!

Not only did Nintendo take on the challenge of making a family-friendly shooter suitable to all ages, but they’ve also taken on the challenge of making it mainly online (something which only a few developers have mastered). The incentive of the game is not to kill, but to achieve the game-modes instructions. This is one of the first online games to me where I didn’t feel inclined to kill someone, and instead relied on sly tactics to paint the map (as acquired by the Turf War game-mode). I was instantly hooked by the game and discovering new ways of overcoming the opposing team.

Having not played any other demos or early access versions prior to the Testfire, I’m only able to base my thoughts on the Turf War game-mode – but that alone won me over. Each round was short, but this isn’t necessarily a criticism. Turf War offered enough time for us to roam around the selected maps, and at the same time wasn’t too long so that the gameplay became tiresome. The selected time was a perfect neutral gameplay time which assured the rounds were fun to play.  Turf War is a 4v4 where your team must work together in covering the map with your selected colour more than the opposing team. You can splat your opponents to delay them, or you could route yourself around the action to paint the overlooked areas. Much like Mario Kart 8, at times it may look like you’re winning, but that can easily change in a matter of seconds. It’s hectic, but it’s brilliant. 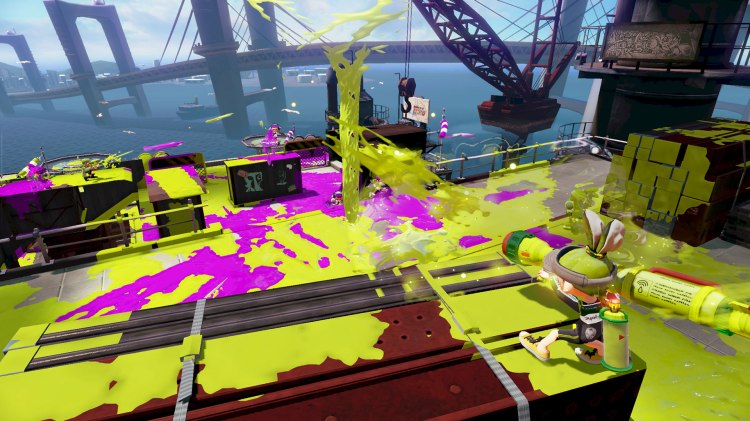 The actual control scheme on the other hand took a little getting used to. Like many other modern Nintendo games that require aiming, the game utilises the gyroscope to give an optional aiming method alongside the analog stick. Unlike other modern Nintendo games, the gyroscope was more sensitive than other games that require aiming and using this control method felt like a necessity. Of course there are players who absolutely despise motion controls, and with that in mind during the weapon select screen, pressing ‘+‘ on your gamepad would give you the option to deactivate it. But the weird thing is that these motion controls worked. In most console shooters I’ve come accustomed to using an analog stick, but the sheer absurd and chaotic gameplay where you must spray the entire map required fast reactions, something only achievable by the motion controls. It will take a while getting used to, and you may find yourself often pressing ‘y’ on your gamepad to reset the camera positioning, but it did lead to more accurate aiming.

The various weapon choices are fun to play around with, but after a few rounds its easy to find which equipment you feel works best for you. For me it was the paint roller, as I preferred the up-close melee attacks opposed to long-range shooting. It’s all a matter of opinion though, as I’d seen various players try out their own unique weapon choice.

The touchscreen on the gamepad showcased the map and reveals which parts of the map are dominated with which colour. While respawning, it’s a great idea to look at your map and plan where to paint next.

As I’m sure you’ve also heard, an 8-bit game is also there to pass the time as you wait for the lobby to gather enough people to play. It’s definitely entertaining to have.

Again, the Testfire was limitative with the maps to play with, so my experiences were with Walleye Warehouse and Saltspray Rig.

For the majority of the gameplay of the Testfire, I had assumed that Walleye Warehouse was the only playable option as it was the only map that our sessions took place in. It was a little of a confined space, and there wasn’t really much of an opportunity to escape eyesight of the opposing team. Luckily there is the higher scaffolding so that your Inkling can skip past some of the action, yet this is definitely more of a combat map which requires high wits to pass.

Out of the two maps, Saltspray Rig was definitely my favourite. The more open space allowed players to have different opportunities to take over certain areas and mark their spot in the map. Also the various levels in the map meant jumping from one spot to another would always be unexpected, you’ll never know who’s about to show up. Saltspray Rig also has the advantage of letting people to not be part of the action if they wish, as they can just occupy a certain zone instead of fighting against everyone else.

Even though I haven’t played the other maps, Youtube videos and online previews do prove that there are even better maps around the corner – and Nintendo have promised continuous free updates of new maps after launch!

How well has Nintendo mastered the online play? When Mario Kart 8 first was launched, the connectivity was a bit shoddy, whilst Smash Bros Wii U isn’t the most reliable of online play. Splatoon on the other hand managed to run perfectly well without a hitch. At times connecting at the lobby would take a while, but luckily we have our 8-bit game to occupy our time. When actually playing, there is no sense of lag or poor connectivity, the whole game felt very streamlined.

Of course it’s noting that there still isn’t a voice chat option due to Nintendo’s insistency to be child cautious. Despite previous articles discussing how Nintendo merely have to implement an optional voice chat option which could have a parental lock, there seems to be no movement in making voice chat games a reality. Even so, I hardly noticed the missing voice chat during the gameplay. I became so fixated in the gameplay itself that any other voices other than my rambling would’ve been a distraction. Perhaps in the long-run the lack of voice chats will become more noticeable? Only time will tell.

But the online play was so good, that each hour when the servers went open felt merely like minutes. It had me craving for so much more and May 29th will be when this craving is fulfilled. The error message which came up took me by surprise because I had thought I encountered my first connection issue, yet even then it was just the servers being cut.

So that was only a small glimpse of the upcoming game, but it sure was an enticing one. This mini overview  is just the basis of a much larger game. It will be a joy to pick this game up on May 29th 2015.